Buckle up literary lovelies! I am about to pull you down a fantastical rabbit hole with my series review of The Panagea Tales by McKenzie Austin! 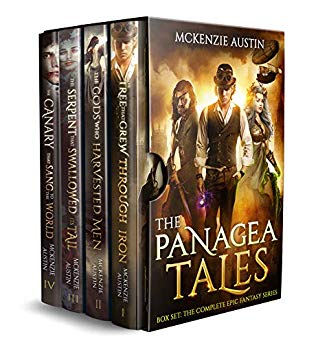 Enchanted pocket watches, vengeful gods and goddesses, and a world built by iron and steam: it’s the award-winning fantasy series you’ve been waiting for, all wrapped up in one digital box set. This collection includes the completed tetralogy of the Panagea Tales: 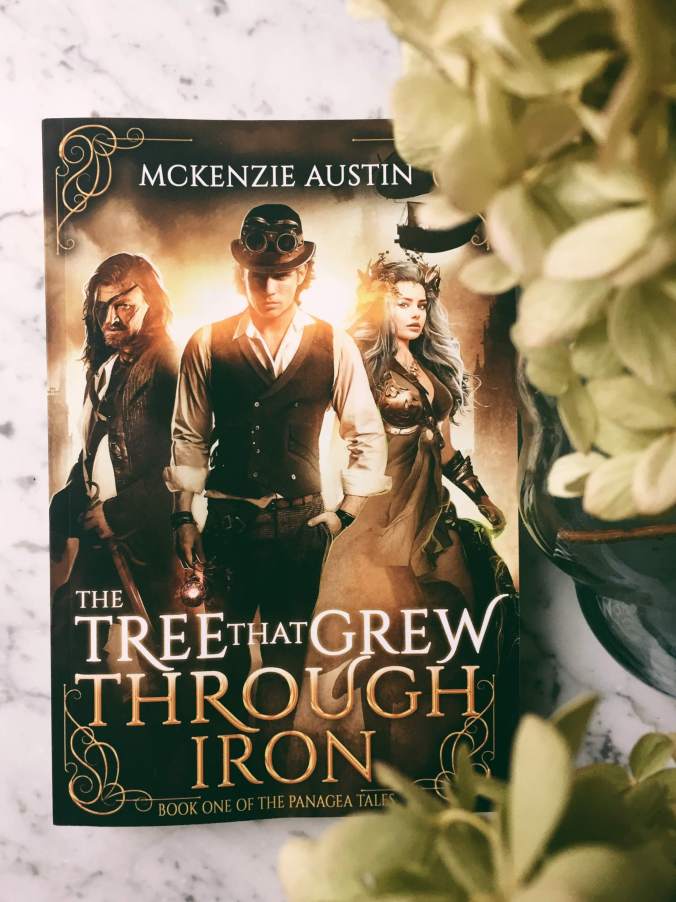 The Tree That Grew Through Iron (Book One)

The world’s end was his beginning.
Whole chunks of earth are withering away from the mainland and falling into the sea.
Natural disasters are claiming thousands of lives.
Prayers are no longer answered by gods.
Prayers are answered by machines, and the Time Fathers of Panagea.
Nicholai Addihein, one of the eight ruling Time Fathers, struggles to save the lives of his people. After a single moment of misunderstood treason, he must also save his own.
While running from the wrath of Panagea’s other Time Fathers, Nicholai lands in peculiar company. Can a fabled immortal, a crew of societal rejects, and a silver-haired woman with a mysterious past, breathe life back into a world on the brink of death?
With all of existence at stake, Nicholai and the others prepare to fight until their last breath to change the fate of Panagea. Who would ever guess that success might be just as fatal as failure? 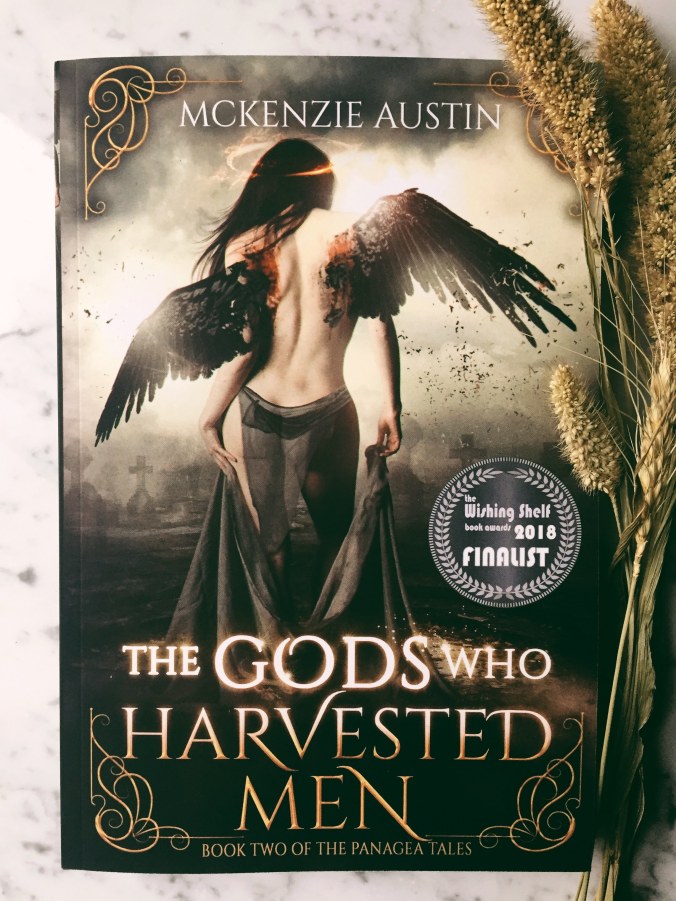 They halted Panagea’s decay.
Some gave everything for the good of the land, and for the good of the people.
Unfortunately, the grass isn’t always greener on the other side of the iron fence.
Nicholai, Umbriel, Kazuaki, and the crew, invite the purifying breath of nature back into their depleted, metal world.
It isn’t all they invite back.
The archaic gods and goddesses of Panagea’s past return with the flowers and trees. While humanity was quick to forget them long ago, the gods never forgot the betrayal that they suffered from their creators. They intend to issue a painful reminder.
As Nicholai and the others scramble to contain the gods’ wrath, they learn that the only advice they have is absent of any comfort:
Hold fast.
Keep your wits about you.
And most important of all… no matter what else you do… don’t pray. 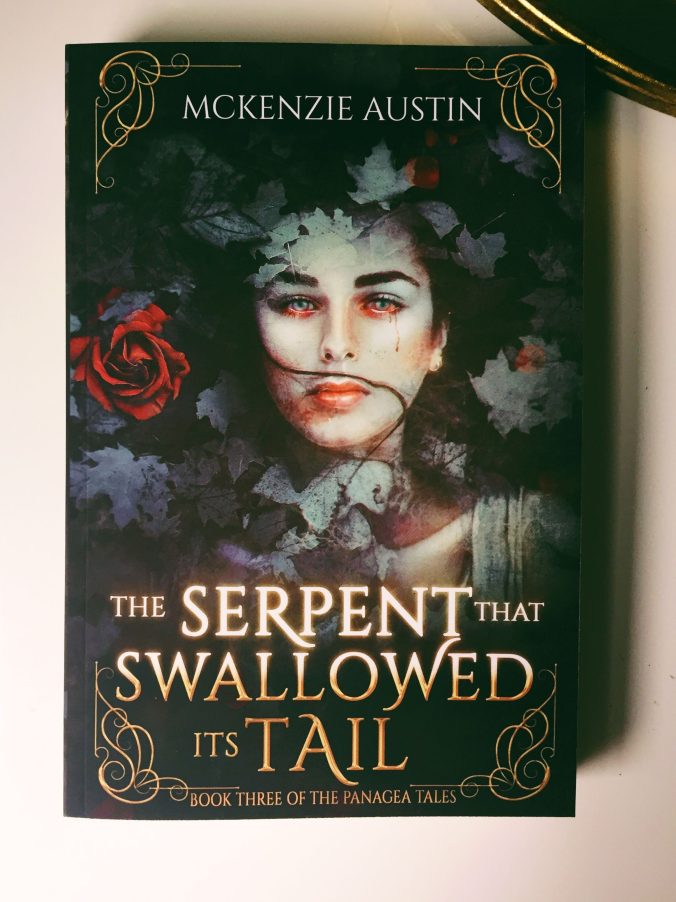 The Serpent That Swallowed Its Tail (Book Three)

After the devastating events in Seacaster last year, Nicholai and the crew find that their lives have fragmented from one another entirely.
Some are out for redemption.
Others are out for revenge.
One hunts for a missing piece.
Another searches for inner peace.
Not unlike the crew, Panagea becomes a land divided. The continent severs into two landscapes: the territory of the gods, and the land of the people who managed to survive their onslaught.
Invisible lines run between borders and brains. Disparities collide all around, creating tension between divisions. Soon, all must ask themselves, “Who are the bigger monsters? Gods or men?”
Plagued by resistance, betrayal, greed, and doubt, can Nicholai and the crew survive their individual crises long enough to taste victory over their burdens? Or is everyone running on borrowed time?
One thing is for certain: when the serpent swallows its tail, eventually, everything comes full circle. 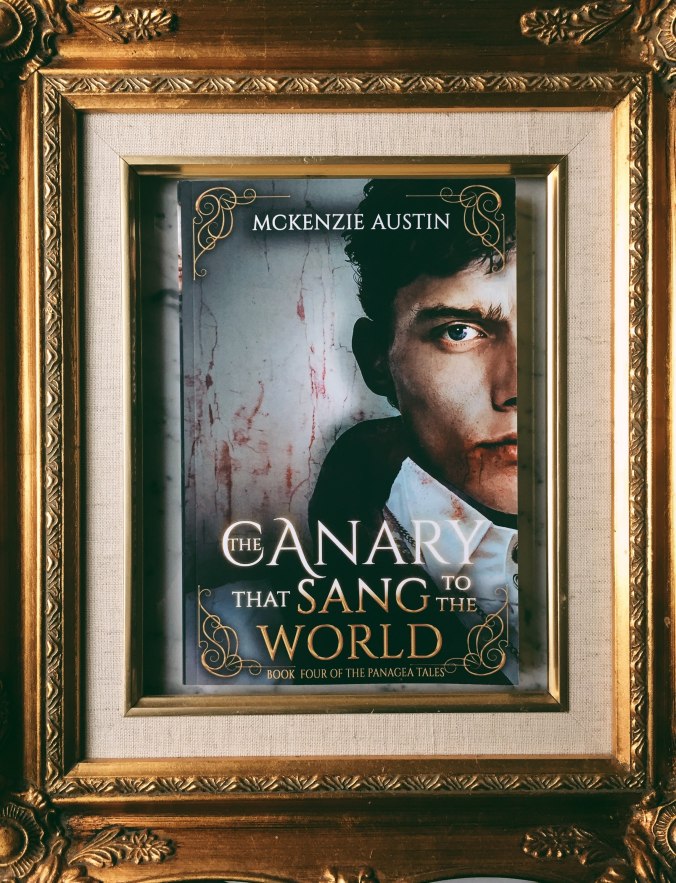 The Canary That Sang to the World (Book Four)

The truth lives in the songbird’s cry.
There’s a time to live, and a time to die.
Determined to bring an end to the Chronometers and the tainted legacy of the Time Fathers, Nicholai and the crew embark on their final expedition: destroying the eight objects that have brought chaos and corruption to Panagea since the day they were gifted to mankind by the gods.

The Tree That Grew Through Iron (Book One) –  I’ve only taken three quotes from my previous review you can find the rest here!

“‘I’ve enjoyed hearing all of your tales. There’s a magic to what makes a person who they are; though you’ve all faced terrible adversities, I find you to be wonderful people.'”

“‘Man covets immortality, and yet all you see with everlasting eyes is everlasting nightmares.'”

“‘Revi, you told me once that time rarely ever solves your problems, no matter how much of it you have,’ Nicholai stood, unable to tear his eyes away from his home division. ‘Do you still believe that?’ Revi shrugged. ‘I do.’ He followed Nicholai’s eyes to Southeastern. ‘But as time goes on, it becomes less about waiting for the problem to solve itself… and more about waiting for your head and your heart to accept the knowledge it won’t. Only then does it become clear what you have to do.'”

*** I have misplaced my notebook which held all of my favourite quotes – I never came across a God of Lost Things in The Panagea Tales but if there was one I would have sent my prayers to them. ***

The Serpent That Swallowed Its Tail (Book Three)

“Necessity often flirted with the edge of misconduct.”

“It was not a fate she’d wish on anyone. She felt for him truly. A disconnect existed, however, in feeling it in her heart… and showing it in her actions. It was hard to be vulnerable when she wanted nothing more than to be strong.”

“For as much as Bermuda loved the crew and wanted to ensure their mental health, she found herself unable. How did one stabilize the raw emotions of another, when they failed to stabilize even their own?”

The Canary That Sang to the World (Book Four)

“Cemetary air had a strange smell to it. The thought made Rennington smirk as he loitered in the ground, his hands in his pockets. It was the scent of yearning. Lost dreams. The fragrance of what-could-have-been’s, and mourning, and grief. It also smelled like home.”

“‘Do not hold a mirror of judgment up to me and fail to see your reflection staring back.'”

“‘Vadim.’ Nicholai let the name roll off his tongue slowly. ‘Vadim Canmore.’ He grinned, his neck lolling as he looked at Kazuaki. ‘More like… Vadim Can-not-be-a-Time-Father-any-more.'” *** I LITERALLY LAUGHED OUT LOUD AND STILL CAN’T HELP BUT CHUCKLE. ***

I am a mess dearest readers. My heart has been uncontainable and even though I am finished this series I still feel as though I am living more in Panagea than my current reality.

I have never reviewed an entire series before and have to admit I am so glad The Panagea Tales is my first one. It has been a long time since I have been gripped by a series in its entirety. Where I wanted to or more accurately needed to read every book back-to-back. Most of the time I don’t like to pick up a series until I know it has been finished. I had to with this one as the lovely author was still in the process of writing the books. So I found myself waiting to start The Serpent That Swallowed Its Tail until The Canary That Sang To The World was within my grasp. Otherwise, I would be the biggest grump having to wait. (You should have seen me after I finished The Gods Who Harvested Men.) Luckily I did wait, as I polished off both books within forty-eight hours.

THIS SERIES IS ADDICTING! There have only been a few times where I have been compelled to actually finish a series. I usually find somewhere around book two, or the beginning of book three, that I lose momentum from something within the plot or actions of the characters. Or just the usual disappointment of a second and third book not living up to the first in the series. The Panagea Tales ranks up there for me with the few other series which held me fast within their pages, which include Harry Potter, The Hunger Games and Neal Shusterman’s The Unwind Dystology.

I found every book a revelation. The Tree That Grew Through Iron caught me fast within its initial story web. The Gods Who Harvested Men shocked me with its mind-blowing creative plot. The Serpent That Swallowed Its Tail kept me hoping for the lives left in the balance and The Canary That Sang To The World made me cry for all we had been through and continued to go through in order to save not only a world thought lost but a humanity almost unforgivable.

McKenzie Austin’s characters are vibrant and captivating. I found myself falling in love and cheering them on over and above their flaws. I don’t think I have ever rooted for a cast of characters as much as the ones I have met in this series. They came across so real that I couldn’t help sharing in their pain, revelling in their victories and being completely consumed by their fictional lives. The character arcs wove so well together and witnessing any and all character growth throughout the series proved just how talented a writer Austin is. (Especially Captain Kazuaki!)

The plot, intricate and spellbinding, comes at you swiftly never truly allowing the reader to rest. There were so many times where I felt as though I was holding my breath. I clutched the third book so tightly I not only nearly broke the book’s spine but ended up having my arthritis flare-up. Thankfully I was able to purchase the last two books (okay, okay, I had to buy the entire set just so I could always have them together) via Amazon for my Kindle. I was then able to swipe rapid-fire till I sadly reached the end. Moment to moment whether action-packed or an intimate conversation between characters, the scenes always felt impactful, as well as skillfully and beautifully written.

Alright literary lovelies, are you growing tired of my complete gush storm about this series? Well, I just can’t help it. It is that amazing! I don’t think I have ever recommended a book/series so much as I have those within The Panagea Tales.

This story, her writing, these characters are everything. Insightful, heartbreakingly poignant, revolutionary and so much more. Her books parallel so much of the pain and experiences of our contemporary society but shown through a fantastical lens. The hope through struggle she presents can only be a source of inspiration in our actual reality.

As a writer, I can only hope to reach even a tiny measure of the magic McKenzie Austin has created in her books. She has been and continues to be one of my biggest inspirations and all-time favourite authors. I am so honoured she and her books found me.

I heart The Panagea Tales Series this much:

You can find Book 1: The Tree That Grew From Iron from Amazon.com & Amazon.ca

BUT if you want to go all-in! (Which I highly suggest) you can find the complete series via Amazon.com here!

You can find out more about McKenzie Austin and The Panagea Tales on:

(I had to buy the complete set via Amazon.ca though!)